It’s 3:30 pm on Thursday, January 2. I should be at work, checking email, answering the phones, and counting down the minutes until it’s time to go home. I should be easing back into the routine  after the holiday shutdown. Instead, I’m at home watching it snow sideways having just awakened from a nap. And now I’m going to blog about it.

Over the last two months, I’ve gained many new followers. Welcome and thank you! I hope you’ve already stopped by my “About” page, but just in case, I’m going to take this opportunity to introduce myself and this blog by explaining why I’m not at work.

As I drove home on the Monday evening before Christmas, I had big plans. I ruminated on the various projects that I would complete while I was on break, including organizing our new home, going full press on toilet training, and finally converting some of my drafts into finely crafted, published blog posts.

Suddenly, a week had gone by, it was New Year’s Eve, and I hadn’t accomplished a single thing. So,  I decided that January 1, 2014, the last day of my break, would be the perfect time to renew my commitment to those procrastinated projects.

To prepare myself, I went to bed early. I’ve long since outgrown the urge to stay up until midnight. Staying up until 12:01 AM has only been a source of anticlimax and disillusionment for me. And if there is one thing I treasure above all else since becoming a mother, it is sleep. Oh, and my son. And my husband, of course.

It was my son, Philip, who had me awake as 2013 became 2014. What began as an occasional cough over the weekend became more frequent by Monday. By New Year’s Eve, his coughing was waking up both of us. His body was warm to the touch, he rubbed his eyes, and he coughed. Last night was more of the same. So instead of driving myself to work this morning, my husband, Peter, drove Philip and me to the pediatrician.

When I began this blog four years ago, my plan was to post a photo a day with a short description. Back then, I would have taken my camera to the doctor, snapped a photo, and wrote something along the lines of “Today, Philip had to go to the doctor.”

But my blog has evolved these past four years. Philip is autistic, so something like this morning’s trip to the doctor becomes fodder for the blog. In addition to the coughing and fever, another sign that Philip was sick is that he stopped babbling. He still doesn’t vocalize how he is feeling or where he hurts. While he is now using an iPad as a communication tool, I still have to listen to his behavior. 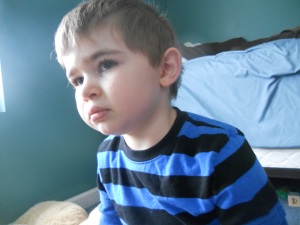 I share anecdotes like this about my son for two reasons: to connect with other parents raising autistic children and to raise awareness and acceptance of autism for everyone else.

Of course, the person who learns the most from this blog is me. While I’ve been keeping private journals ever since I could put a pen to paper, blogging in public forces me to identify my feelings, reflect on my behavior, and to organize my thoughts. I’m accepting my autistic son one blog post at a time.

To improve the way I write about Philip and to remind myself that I am more than a mother, I share other stories as well. I also participate in a few blog hops, link-ups, and challenges, so you’ll see posts written for those sites, too.

This morning, after Philip was diagnosed, we picked up his prescription, and then slowly made our way home over unplowed roads, I decided it would be best to stay home and take a nap rather than battling fatigue and snowy road conditions by driving to work. That’s when I discovered that The Daily Post at WordPress.com is hosting “Zero to Hero: 30 Days to a Better Blog.” So maybe I didn’t finish (or even start) those other projects while I was on break. But now that I’ve had an extra day of vacation, I was prepared to complete the Day One assignment: introduce myself.

Now it’s your turn. Introduce yourself in the comments.

14 thoughts on “Please allow me to introduce myself”