Since it’s the first Friday of the month, let’s begin with a recap of March 2018:

March did not go quite as planned. It started strong as I tried to regain the momentum lost when I was sick in February. While my health was better, life threw me some curve balls that disrupted our routines. We were down a vehicle just as my husband was transitioning jobs. Let me just say it’s hard to carpool when you work in opposite directions. I had to forgo walking while waiting for the bus because I needed to get Philip in the car and go as soon as he was dropped off. I also hadn’t realized how I had grown accustomed to my husband working second shift until he moved to first shift. I could no longer do fitness videos in the early evening.

So, I’m not sad to see March go. And Sam came along just in time for something new.

I’d considered declaring this month “Active April” on my blog and knew it was meant to be when I received an email from Action from Happiness complete with this Active April calendar. 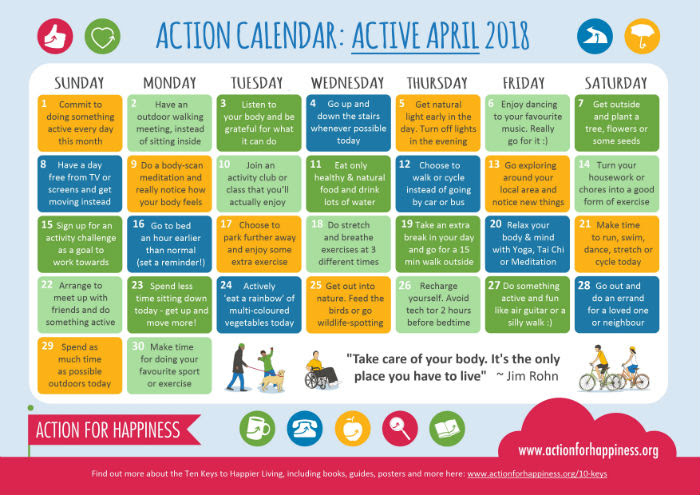 Despite wind, rain, and snow this week, I’ve been outside with Sam to get at least 30 active minutes a day. By the end of this month, I hope to be back to a minimum of 70,000 steps per week, if not more. I want to have at least one day where I walk 15,000 steps. Better still, I think this is the month where I should strive to get my first FitBit badge for walking 20,000 steps in a day.

What are your goals for April?