When this publishes, I will be in the middle of day three of Cub Scout Day Camp. I will be sweating. I won’t have much of an appetite because I’m so hot and sweaty.

By the end of day 1, I had a headache. While I’m sure being surrounded by boisterous young scouts for seven hours contributed to this, I also suspect a lack of water didn’t help. Even though I know water is good for me and I opt for it as a calorie-free beverage that serves as a safe appetite suppressant, I confess that sometimes I avoid drinking anything out of convenience. For instance, I don’t like to drink anything before heading out on a car trip. I hate having to worry about finding a restroom along the way, so I’ll not only skip morning coffee, I won’t drink any beverages.

Even though I knew it was going to be a hot, sunny day at camp, I didn’t drink anything before I left. I didn’t know what to expect. And, I’m sure you can understand, I was happy to avoid peeing in the port-a-potties that were also baking in the summer sun.

Still, I finally realized I needed to stay hydrated. Of course, like the firefighter who spoke to the boys said, “If you are thirsty, it’s already too late.” I never quite caught up and ended up with that headache.

Equally important to my own well-being was the example I was setting for Philip. He loves milk but I didn’t take any with us. I couldn’t get him to drink water until the afternoon. He finally started to gulp it down then but I know it couldn’t have been good for him and could have made him very ill.

On day two, I made sure I drank a big glass of water with breakfast. Then I drank as soon as we arrived and kept offering water to Philip. Again, he only took a few sips in the morning and waited until his cheeks were red to really start drinking. For once, I even let him pour water on his head in an effort to stay cool.

So, take it from me: if you are spending time outdoors in the summer sun, making sure you have a bottle of water with you. Drink before you go outside. Get refills when you can. If you stop sweating, feel nauseated, have a headache, get cool and hydrated as soon as possible. Make sure you are healthy enough to enjoy the great weather. 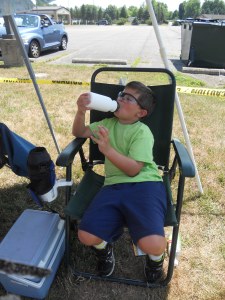