Last month I announced my intention to participate in the 2016 Book Riot Read Harder Challenge. While reviewing the list of tasks, Goldfish had this question for me:

What on earth is a food memoir? I’m now thinking of the autobiography of a tomato and I’m not sure I’d want to read that.

I have to admit I was equally unaware of this niche of memoirs, so I Googled the phrase and replied to her as follows:

I guess it’s a thing. I Googled food memoir and got several top whatever lists. Here’s one of them: http://www.grubstreet.com/2013/10/25-best-food-memoirs-of-all-time.html

After clicking on the link, Goldfish concluded the following:

Huh. You learn something every day. Now that I know what it is, I think I’d rather read the autobiography of a tomato.

Now I want to read the autobiography of a tomato. Until I can find one, I’ll bide my time by choosing Goldfish’s remarks as my December 2015 Comment of the Month. Her words will live on over at my Couldn’t have said it better page.

Might I suggest that, instead of the seeking the elusive diary of a tomato (“Why do people keep calling me a vegetable? I’m a fruit, dammit!”), you stop by Fish of Gold to read a post or one hundred by Goldfish? Despite a life filled with monsters and the loss of her beloved, Goldfish writes with both humor and honesty. You may leave changed, but you will not leave disappointed.

I just learned from Mel at Stirrup Queens that it is International Blog Delurking Week. I’m glad that Goldfish left a comment rather than lurking in the bloggy shadows. Thanks to all my readers and commenters in 2015. Let me know you are here. 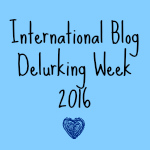 7 thoughts on “Catch Up With Me: the autobiography of a tomato”