Just before March turned into April, I took Philip to our local United Way’s Imagination Library second birthday celebration. Not only did he have fun, I got three blog posts out of the event: my Sunday Slideshow, my March comment of the month post based on a reader’s response to the slideshow, and the story I called “Who is that woman with my son?” I was happy with that third story, crafted for submission to the yeah write weekly writing challenge. I got some lovely comments and a few votes that week.

April was Autism Awareness/Acceptance Month. After blogging every day in April for the last two years, I chose not to publish for thirty days straight. Still, I wanted to participate, so I decided to cross-post “Who is that woman with my son?” on BlogHer. I was pleasantly surprised to have it selected as a featured member post. Within a few days, that post had been viewed more times than any single post I had ever written. Plus, the Australian version of ivillage.com asked to republish the piece. I was amazed by the response to the story.

Last Friday after work, I logged into WordPress and found several new notifications. “Your stats are booming” one said. There were also several new comments on “Who is that woman with my son?” I wasn’t sure what prompted people to dig into my archives, but I read and responded to the comments nonetheless. Then, on a whim, I clicked up on the Freshly Pressed tab and saw a familiar face. 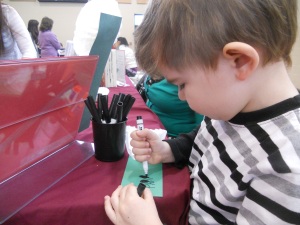 After that, I logged into my email and found the message saying the post had been Freshly Pressed. I owe a big thank you to Emily of The Waiting Blog. She was serving as guest curator and suggested the story.

I now want to thank my new readers and followers. I’ve appreciated your compliments and commiseration. In fact, each month I recognize one person whose comment on a post has piqued my interest or made me think. I feature that person on my “Couldn’t have said it better” page and highlight the comment in a blog post.

My April comment of the month is courtesy of a new visitor to my blog. Here is what Pezcita had to say:

I am “that woman” at the little library where I work, and I must confess that I once stood idly by while a pre-schooler glued five wiggly eyes on a paper lamb and then proceeded to color each of its legs a with a different marker. Why? Because when I first started doing story hour, those who had done it before me advised me to “think like a kid”, and let others do the same. Good advice, though sometimes its difficult to remember how. Isn’t it fascinating how we’re all born with the ability to think outside the box?

“Think like a kid”: I love it! Not only is this a useful insight for interacting with children, I think it has potential for allowing us to approach and solve problems in a creative way.

I hope you will visit Pezcita’s Blog. I’m sure you’ll enjoy her weekly comic strip.

Thank you again to everyone who commented on the post.