Let me make this simple: I want to be invited, but I don’t want to go.

Earlier this month, I skipped the president’s holiday reception for the third year in a row. It’s not like the president knows who I am and noticed I wasn’t there. I passed on the union holiday luncheon, too. Several other administrative assistants in my division encouraged me to attend the union’s shindig, but I’ve never liked crowds. The two events were outside my duty day; therefore no one could make me go. So I didn’t.

But when it comes to our division’s holiday party, right smack in the middle of the work day, I can’t avoid it. People would notice. My own reluctance to go is why I didn’t hassle my coworker who opts to stay behind in the office to work. In fact, this morning I made this meme for her: 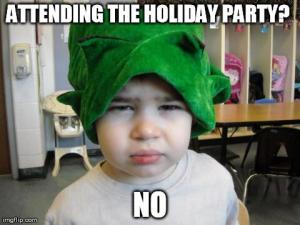 The gathering begins with a potluck lunch. Among my many insecurities about this and similar events is deciding what to bring. I barely cook and never bake for my own family. Why would I want to put forth the effort for coworkers? I kid you not, this year I bolted upstairs to the bulletin board with the sign-up sheet as soon as I read the email announcing it was posted. Since utensils wasn’t an option, I settled on a beverage. Because no one gives you a funny look for bringing a store-bought beverage. That meant I just had to worry about people judging what and how much I ate.

Of course, we didn’t walk right in and begin to eat, at least not those of us who arrived on time. And I can’t pull off fashionably late. That means I had to confront another anxiety: small talk. In addition to my hearing loss, I am at a loss for things to say. After standing awkwardly beside a few different clusters, I finally found a group to latch onto for the remainder of the party. I ended up being able to listen and laugh, be serious and snarky, and be inappropriate at appropriate times. Win!

With the potluck a non-issue, and feeling like I was managing to find people with whom to mingle, I had to confront the final monkey on my back: the white elephant gift exchange.

Oddly enough, it was my initial success that was making me so anxious. That first year, I ended up taking home a container of fancy pasta that I easily re-gifted. And the reaction to the gift that I had brought? Priceless. The woman who opened it jumped. Another coworker was in tears. My side ached from laughing so hard and from holding in the secret that this was my contribution. Below is a photo of the toy that scared my son so much that I took it to the gift exchange so that my co-workers could be equally horrified. And I’m not referring to the clown trying to kill it: 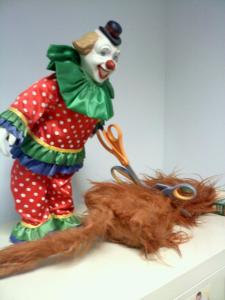 The woman who picked the cat mistakenly thought it was real hair. The creepy clown was from the following year’s exchange.

Last year, my gift was a dud. It was bad, but not bad enough to get laughs or be remembered. No one knew it was mine, but I still felt embarrassed. And I took home a used portfolio. Functional, but not very exciting.

I decided that, if I couldn’t bring a gift everyone would be fighting over or one so funny people would pee their pants laughing, then I didn’t want to join in. You can’t lose if you don’t play, right?

But then I was awakened in the middle of the night by the sounds of Philip playing in his room with the toy that I tried to get rid of before we moved. While I’m glad we ended up keeping it, this got me thinking about whether there were any other toys that I really, really, REALLY wanted to discard. And since Philip wasn’t going back to sleep, I had plenty of time to ponder this. And I remembered a really irritating toy that Philip got for his birthday. We had to hide the thing because Philip wouldn’t stop pushing the button that played a very annoying song. Over and over. And over.

This morning, I quickly wrapped it up and took it to the party. When the gift exchange commenced, I began to get anxious.

What if people think my gift is stupid?
What if I get stuck with something stupid?
Why in the world did I bring a stupid gift?

Eventually my gift was picked. It got some chuckles. No one wanted to steal it. But I didn’t care. I was biding my time, waiting for it to be my turn. Unlike some people, I never pick an unwrapped gift. I don’t like surprises. I want to know what I’m getting. And I knew what I wanted. The rule at this party is that a present can only be stolen twice. I kept my fingers crossed that no one would steal the item again and make it unavailable.

My number was finally called. I made eye contact with the woman who had the gift I wanted.

“You’re going to steal it from me?” she asked.

The party ended, and I got to go home early with my prize. Once I had put in the batteries, I took it into Philip’s room. The smile on his face when he saw it was worth all the anxieties about the party. 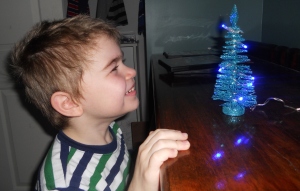 A mini Christmas tree with lights-perfect! He’s still playing with it as I write this post. 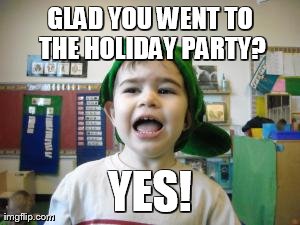 10 thoughts on “The (white) elephant in the room”