Back when Philip was taking an afternoon nap every day, Peter was the first in our household to go to bed. He would come upstairs to read a book while I was finishing up Philip’s bath. After drying and putting on pajamas, Philip would head downstairs. As he passed our bedroom, I instructed Philip, “Say ‘night, night’ to Daddy.”

For a long time, Philip did not respond. Then one night a year ago, I heard it. In a sweet sing-song, Philip said, “Night, night.”

After that, he would sometimes say it with prompting. Other nights, he would be too distracted by a toy and never looked back. Occasionally he would stop and look at Peter, but then continue on his way without a word. 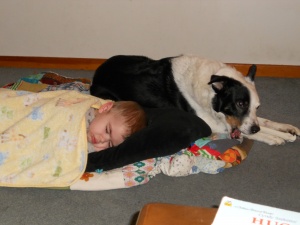 Now that Philip is no longer napping, he is going to bed a bit earlier than before. That means he is already downstairs from his bath when Peter heads up to read and hit the sack. Peter and I decided that Philip should still say goodnight.

That hasn’t worked out so well.

Philip will say, “night, night,” but then bursts into tears while running upstairs with Peter. I guess he thinks we are telling him that he has to go to bed, too. He does so, but he definitely doesn’t like it. He’ll climb into bed, cover himself with the blanket and cry. He may stay there a moment or two, but then he comes back downstairs, still crying. One night last week, it took him almost twenty minutes to calm down.

Despite these bumps, something exciting happened last Thursday night. Peter went to bed early, while Philip was still in his room getting dried and dressed after bath. Philip turned off the light to his room and heading toward the stairs. Without prompting from me, he stopped at the bedroom door and said, “Night, night” to Peter.

It was a good night indeed.