I originally drafted my “Five things Friday: free to a good home” post back in June when we first pick up a trunk-load of freebies. I thought it was neat how I had found so many free items in such a short period of time. I felt like I could touch on the green theme of reusing items. This seemed especially appropriate since Philip doesn’t always interact with items or play with toys as one might expect.

I quickly got three out of the five photos needed for the post. I really meant to get the rest of the photos ASAP and then schedule the post for the next available Friday.

It took me until August to do it.

By then, I had lost my enthusiasm for the topic. I began to think of it as a throwaway post. It seemed ironic that I rescued it from the trash much like the items about which I wrote.

What free items have you come across this summer? Tell us why you are thrilled by your find or why you are glad you didn’t waste any money on it.

The mom of six, “3 girls, 2 boys and an angel in heaven,” who blogs anonymously over at givethemavoice77, answered with a story that was much more exciting and interesting than my post:

My son’s bike broke at the beginning of the Spring season. Even though he was heart broken, money just wasn’t in the budget for a new bike. Last night my DH was driving through a high end subdivision, when he spotted a shinny, yellow bike on top of a trash can. He stopped and looked at the bike, but was certain that some kid had just put the like new,shiny, yellow bike there by mistake. He decided to knock on the door anyway. Long story short, the chain had broken on this high dollar mountain bike, and the owner was tired of looking at it. Hubby brought it home and had the chain fixed in 5 minutes. Last night my son was bubbling over with pride as he zoomed around on his new ride. I am happy we didn’t have to buy a new bike, because the money we saved can be used for other family things. Plus, money don’t grow on trees.

Thank you, givethemavoice77, for taking the time to read and comment on the post. You’ve been following my blog for ten months now. I appreciate it when you stop by and leave a comment. Your comment made me glad that I didn’t trash this post. For that, I am adding you to my “Couldn’t Have Said it Better” page as the August 2013 comment of the month. 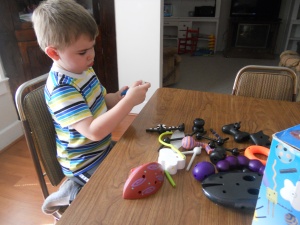 2 thoughts on “Turning trash into treasure”