This weekend, at two separate family gatherings, two different people meeting Philip for first time had the same thing to say about him:

“Look at how he keeps himself entertained. He sure is having fun!”

Both times, Philip was playing with objects that he had found in the yard. He kept finding new ways to play them. He explored each object completely, looking at them from different angles and incorporating them into his stims. 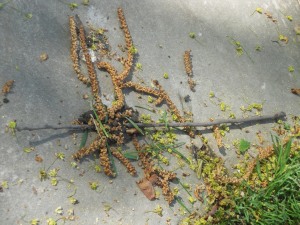 Sidewalk art from found objects: just one example of how Philip can creatively play by himself

It was nice to hear others speak appreciatively of Philip’s ability to play alone. When Philip was diagnosed with autism, isolation was pointed out to us as a flaw. Yet, shouldn’t all things be done in moderation? Isn’t it okay if Philip likes playing alone and has the ability to do so? How exhausted would we be if Philip demanded our attention 24/7? How much worse would Philip be if he was never able to exercise independence?

At the end of April, I vowed to start my own list of “1,000 Ausome Things.” I’ll be adding this post to the emerging collection. I welcome readers’ suggestions, too. Do you have a story of an autistic person being ausome? Have you read a story portraying autistics in a positive light? Tell me about in the comments so the list of ausome can keep on growing.

7 thoughts on “One of those ausome things”