Earlier this week, I wrote about the Family Fun Night that Philip and I attended at his preschool on Monday. I described how one of the women staffing the event, seeing how much Philip liked the pipe cleaner that he picked up at the craft table, gave him two more to enjoy. He played with them while eating a snack. I talked to the woman who is a parent mentor in my local school district. She mentioned that she had purchased many more pipe cleaners for her table at event on Saturday. When I asked her what the event was, she told me that the Ashland City-County Health Department was co-sponsoring a Family Fun Fair.
When we got home, I found the event details online and marked my calendar.

After Philip was so sick on Thursday, I thought that we might not be able to go to the Fun Fair. But by Friday, after a solid night’s sleep, Philip was already feeling better. And when he got up this morning, he wasn’t coughing and his breathing had noticeably improved.

I had to call my mom about something else this morning, and I mentioned that I was thinking of taking Philip to the Fun Fair. She offered to go with us. So, I loaded Philip in the car and we went to pick up Grandma.  It was really a good thing that she went. Not only was it the first opportunity for her to see her grandson in over a week (she had been on vacation in Vegas), but the extra set of hands was invaluable.

The fair started outside. There were free car seat checks in the one outer building. In the parking lot, the sheriff’s department had its bomb squad vehicle, the Jeromesville Fire Department had brought one of its trucks and Hayesville’s Fire Department had its ambulance on display. At first, I thought Philip might actually want to touch-a-truck, but, as we approached the vehicles, he shrank back. We decided to head inside where it was warmer.

After checking in, we started to explore the tables set up by various vendors and community agencies. Right off the bat we saw two staff members from Philip’s preschool. As with most of the tables at the fair, they had freebies for kids and information for parents. All of the tables had either an activity for children or a hands-on display. In front of the preschool’s table was a fabric tunnel. Philip crawled right through and was rewarded with an Easter egg filled with play dough.

Also at the other end of the tunnel was the table at which sat the woman from Monday night who told me about the fair. She was stocked with pipe cleaners for a craft in which kids could make a butterfly. Philip looked at these briefly, but was more interested in checking out the table next to hers. He was examining what my mom thought might be mini frisbees in a basket.

The activity at this table involved putting plastic chips through a slot cut into the lid of an empty canister. The woman at the table explained how this could improve hand-eye coordination. When he finished the task, he got to pick a sticker.

I was impressed by the variety of activities. The goal seemed to be to demonstrate simple and inexpensive activities for parents and caregivers to do at home. The fair also showcased community resources, many of them offering services free of charge or at a very low-cost.

The Salvation Army had a prize wheel at their table. Children could spin and the wheel would determine the prize. Spinning the wheel was reward in itself for Philip. He loved to watch the wheel turn and liked the sound of the pointer hitting against the spokes. Most of his “spins” only turned the wheel partially. When he finally got a full revolution, the lady at the table used the result to determine what Philip had won. He got to “pick two,” so I chose a Handy Manny book with wheels and a Little Einsteins coloring book. Philip probably would have kept spinning, but another family had approached the table at this time, so we moved on.

In the next room they were offering fingerprinting and face painting, both of which we skipped. The former had too long of a line and the latter just didn’t seem like a good idea. Instead we went to another table with pipe cleaners. Here, the pipe cleaner was to be used as the basis of a bracelet. There was a bowl full of blue beads. I was impressed by the fine motor skills Philip demonstrated by picking out one bead at a time from the bowl and putting it on the pipe cleaner He really loved touching the beads, and I was afraid he might reach in, grab a handful and throw them in the air. Fortunately, he did not. Again, there were others coming to the table, so we stopped after a few beads. Below is Philip’s bracelet.

It was a good thing that Grandma was along because I had my hands full with Philip. I would assist him with the activities and crafts while she was in charge of holding the bags. We ended up leaving with quite a stash, and we didn’t even get something from every table. 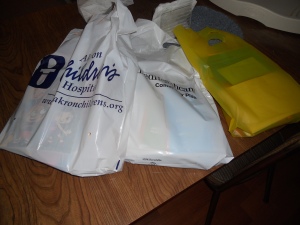 At some of the stations I told the people that Philip has autism. I usually waited until they asked something about him, like his age and whether he was in preschool. I feel guilty in a way, because I wondered why I was telling the people. In all honesty, I guess it was because I wanted them to have realistic expectations for him. I wanted them to know that he would not answer them when they asked him his preferred color. He wouldn’t respond to their questions about whether he wanted to make a particular craft, or if he would like a sticker. 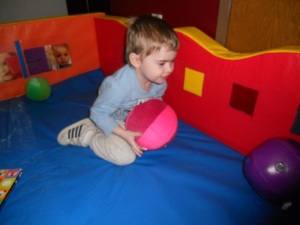 I didn’t tell the lady who tried to inform Philip that “the balls stay inside this area so they don’t get lost” that Philip has autism and that I believed she was wasting her breath. But does that mean I have low expectations for him?

I also didn’t tell the college student who was assisting at a table with the sorting activity pictured above. She asked Philip if he could sort the objects on the tray into the appropriately colored bowls next to the tray. He didn’t respond to her. Instead, he carefully examined the various objects which included cotton swabs, plastic shapes, pasta, dominos, plastic utensils and other items. Then, he began to set aside all of the wagon wheel pasta. When he finished with that, he found plastic circles and put them on top of the pasta. He was only choosing circles from the tray. Sure, he didn’t sort them the way the helper asked him to, but he was organizing them in a meaningful way.

In the final room we checked out, there was a popcorn machine. Philip went straight to it. He munched on popcorn while we looked a more displays. At the one, he was offered a choice between a blue or pink plastic cup. Instead of taking the blue one, he stacked it on top of a pink one. And then he changed his mind and put it on top of another blue cup. He continued to stack the cups by color. The lady at the table complimented his sorting skill.

We didn’t stop at every table, but I knew that it was probably best for us to be leaving. More people were arriving, and I didn’t want to push Philip into sensory overload. Grandma held onto Philip while I filled out a survey and signed up for a door prize.

When we headed to the parking lot, I took Philip past the touch-a-truck display. On a whim, I led him to the open ambulance to see what he would do. This time, he climbed up inside. Once there, he realized there were many things to look at. I thought I wouldn’t be able to get him out. He even tried to lay on the stretcher.

Eventually, I convinced Philip to climb down, and we all got in the car. Grandma sat in the back, holding his bag of popcorn. He snacked during the drive home.

After dropping off Grandma, Philip and I continued home. There, we unpacked the bags to show everything that we had picked up to Daddy. Daddy inflated this mini beach ball for Philip.

Since Philip is now on spring break, I’m glad that this fair took place and that we attended. I picked up several ideas for things to do with him at home during break.