The CDC released numbers about the prevalence of autism this week. Briefly, they announced that 1 in 88 children has been identified with an autism spectrum disorder and that 1 in 54 boys will be diagnosed with ASD.  A quick search of the topic showed many online news articles reporting the data along with lots of bloggers discussing the statistics and their implications.One blogger, Diary of a Mom, wrote about the news here and encouraged others to tweet pictures to put faces to these numbers (search for the hashtag #1in88 on Twitter for examples). Another blogger that I follow shared her photo in this post.

Since April is Autism Awareness Month, I decided to join in and share pictures of my 1 in 88, my 1 in 54: 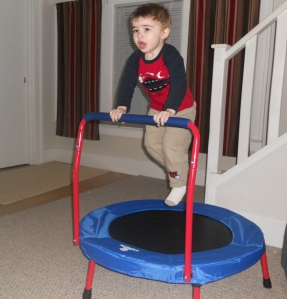 My 1 in 88 jumping on his trampoline

Here are links to just a few of the other bloggers showcasing the ones they love and putting faces to the numbers.

Lou’s Land: One in a MILLION!

Between Hope and a Hard Place: More than a Number

Footprints in Time: 1 in 88 …not just numbers, People

the kitchen creative: Shine a Light on Autism

Try Defying Gravity: What About Now?

stark. raving. mad. mommy had readers submit photos and then created this video. I had to add it to my post.